The US states of Washington and Oregon as well as the Canadian Province of British Columbia achieved all time record maximum temperatures - in some cases more than 8C higher than any previously recorded temperature at the site.  An unofficial list of all the new all time record maximum temperatures in this event, courtesy of the "coolwx" website run by Dr. Robert Hart of Florida State University, is shown later on this page.

Below is a commentary on this event. Many of the charts, below, come from a US list-serve.

This first image, provided by Dr Paul Roundy at the University of Albany, shows what the early predictors were for this event. 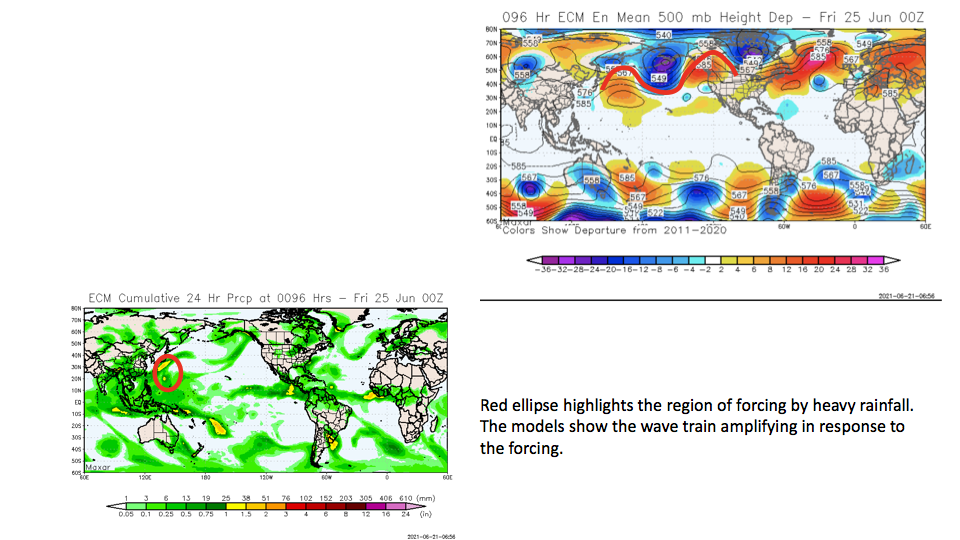 Dr Roundy noted: "Heavy precip over the West Pacific, associated with tropical depression 6 and along a front near and east of Japan appear to amplify a North Pacific wave train that favors the NW US/Western Canadian ridge at the time."

Other models shared this early prediction of the event. Dr Cliff Mass, at the University of Washington, shared these plots from Dr Alicia Bentley (NOAA) web site. They show the GFS ensemble standardized anomalies, for which height anomalies were in excess of 3 standard deviations above normal for the location in question: 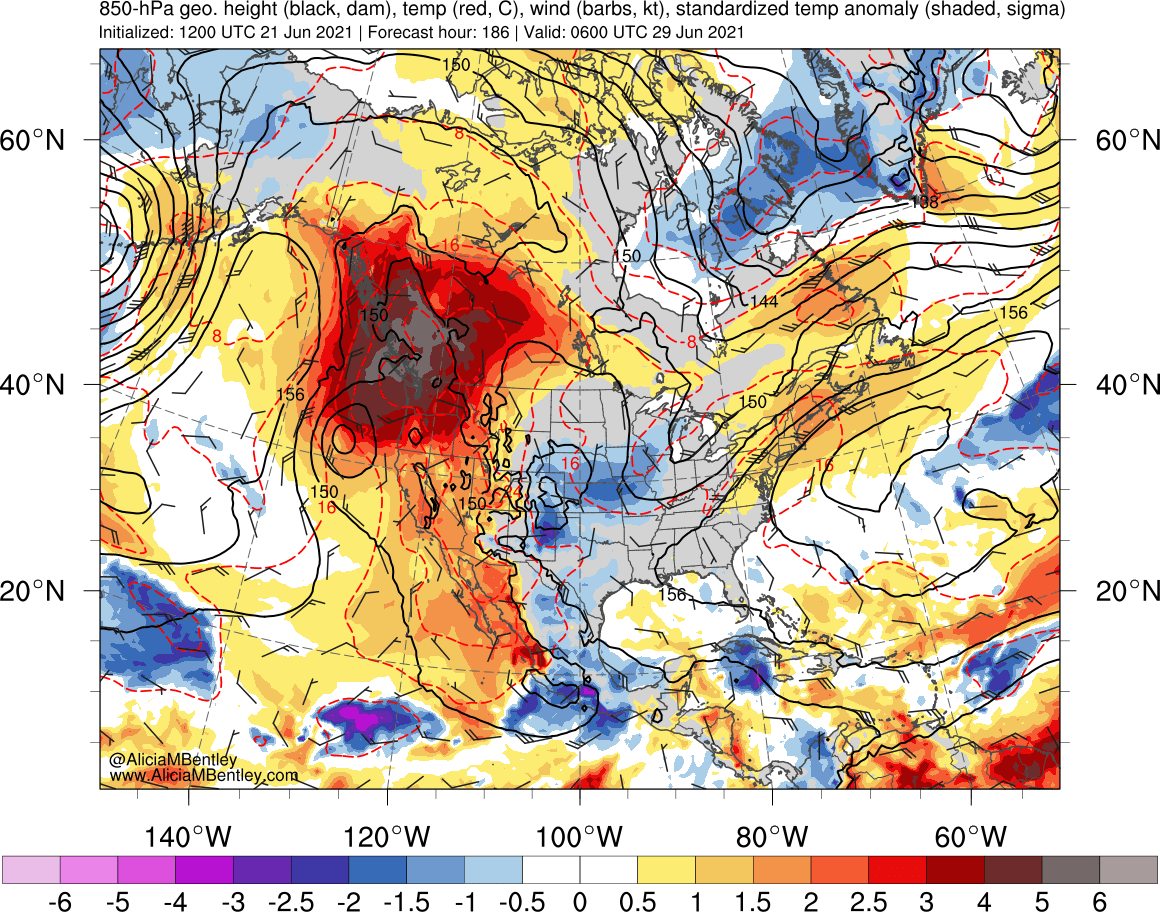 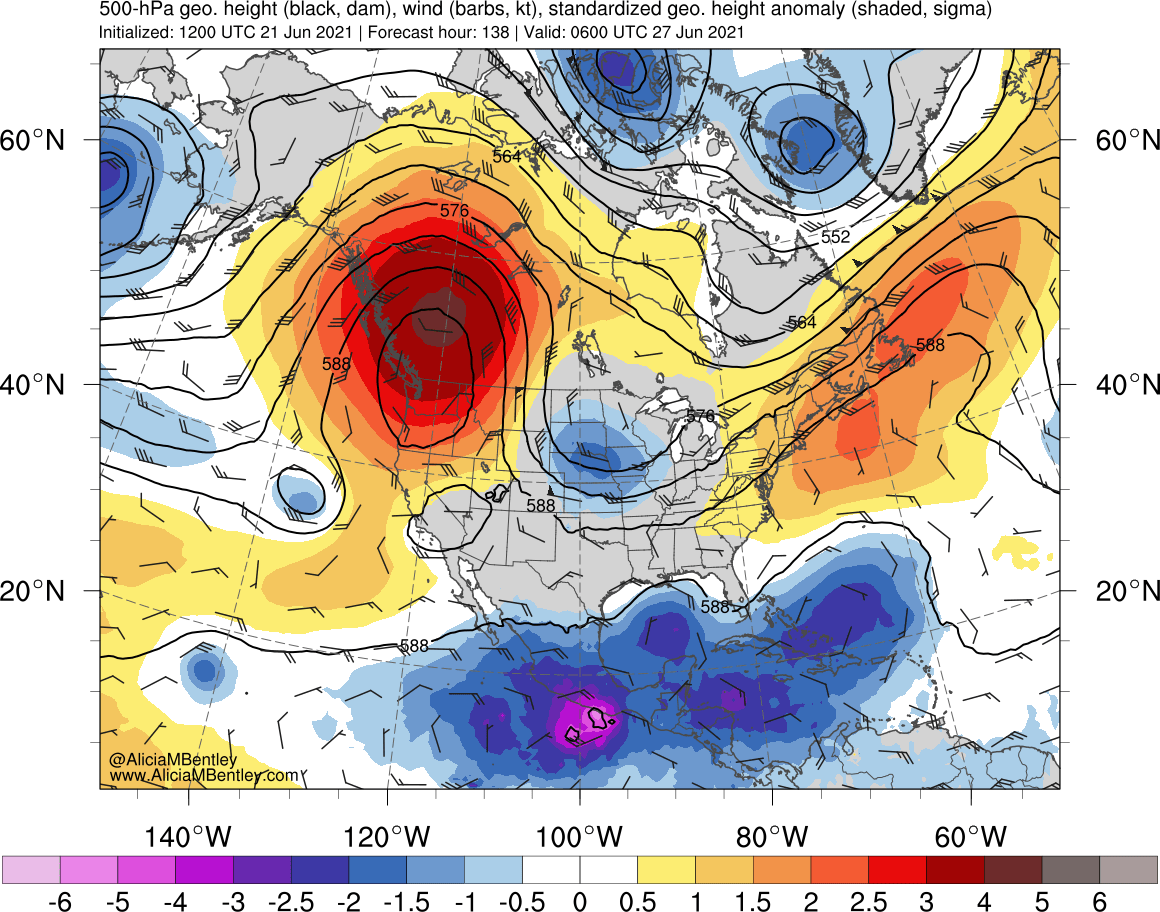 Some discussion that took place prior to the event. From Paul Wolyn:
"The GFS and EC have southeast flow at 850mb over the OR and WA.  Could the southeast flow advect the heating from the elevated mixed layer over central Oregon into the PDX and maybe the SEA area?  Much of central Oregon is at 4000 to 5000 feet MSL.  I wonder if this could be contributing to the extreme temperatures in the model runs.  It could be the "perfect" combination of many factors leading to the extreme heat."

Higher resolution models, such as the WRF run at the University of Washington, added details to this picture:

This extreme heat event was predicted well in advance.  At that time, as what was being predicted was something that had not been seen before, there was plenty of conversation about if this was indeed real - or some sort of model error.  It did turn out to be true.

First - the observed 500mb height from Quilayutte, WA, USA, and the historical soundings for that site: 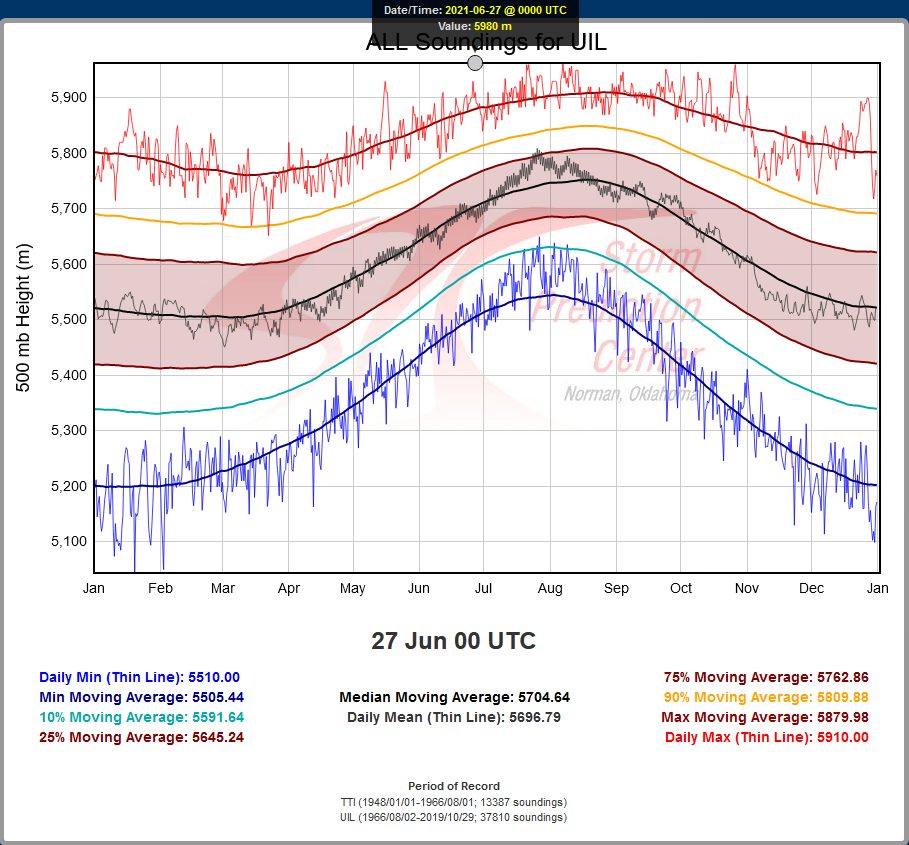 In addition, 925mb temperatures were close to, if not, greatest ever observed, both at Quillayute, WA, and Salem, OR 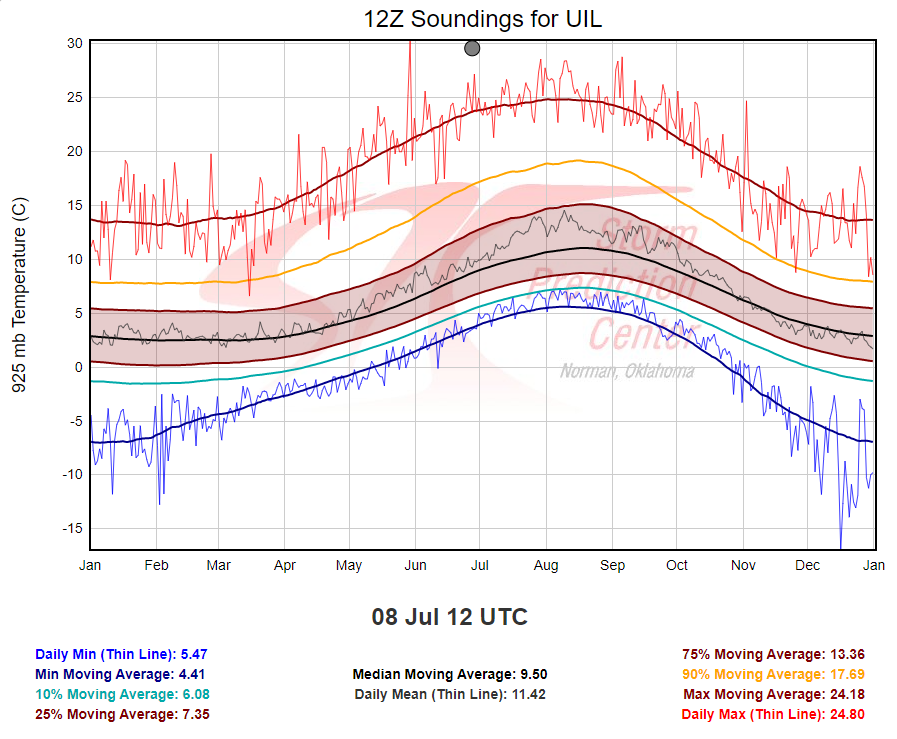 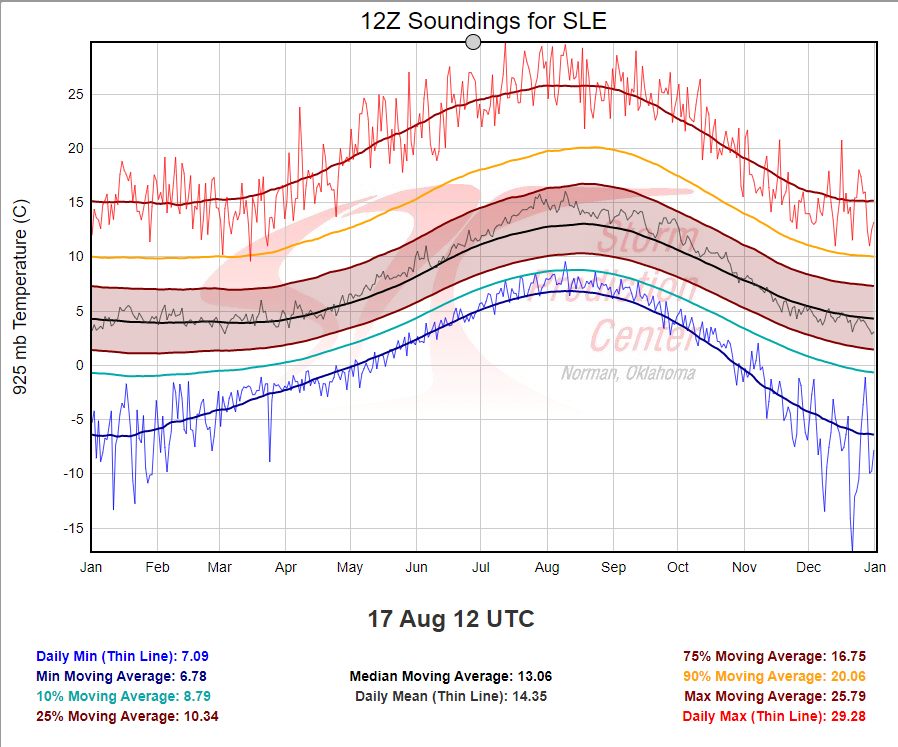 In British Columbia, Canada, records were also set. From Greg West: "The headliner is Lytton, BC, ...in the lee of the Coast Range, extremely dry climate, often the hottest location in BC, and Canada. Our old national record was 45.0C set in Saskatchewan in 1937. Lytton's old all time record was 44.4 in 1941. On Sunday they hit 46.6. Then on Monday they hit 47.9. Tuesday they peaked at 49.6 (that can be rounded to 50C?). I'm really completely dumbfounded. Breaking the old all time record by more than 5C, a month from the hottest time of the year, and 3 days in a row."

Many all time records were set. Additionally, the temperatures were substantially warmer than what is normal for these locations. Below shows the high temperature in Portland, Oregon, being 36 degrees F (20C) above normal. 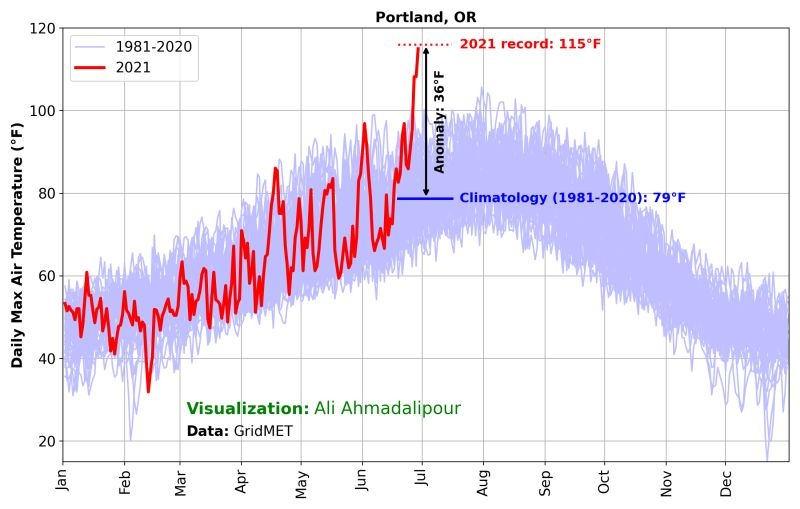 WA, OR, and BC are all usually cool and cloudy. Houses are built with large, south facing windows, to maximize sunlight into houses. Less than half of houses have air conditioning.  In short: WA, OR, and BC houses are all built to the past climatology of the area, and the heat they got was very far from that climatology. One approach taken was to board up windows. In contrast to an incoming tropical cyclone, in which the boarding up is to prevent glass from breaking, here, it was to block out the sun and try to keep in the cool air. Dale Durran, University of Washington: "One thing I did to prepare for the heat was buy some 4’x8’ sheets of 1/4” foam core and use them to block the direct sunlight in several windows.  Below is a photo of one row of such blocked windows.  I’m going to save these for really cold days too — they have to have an R value above most window coverings and work particularly well on the sloped glass." 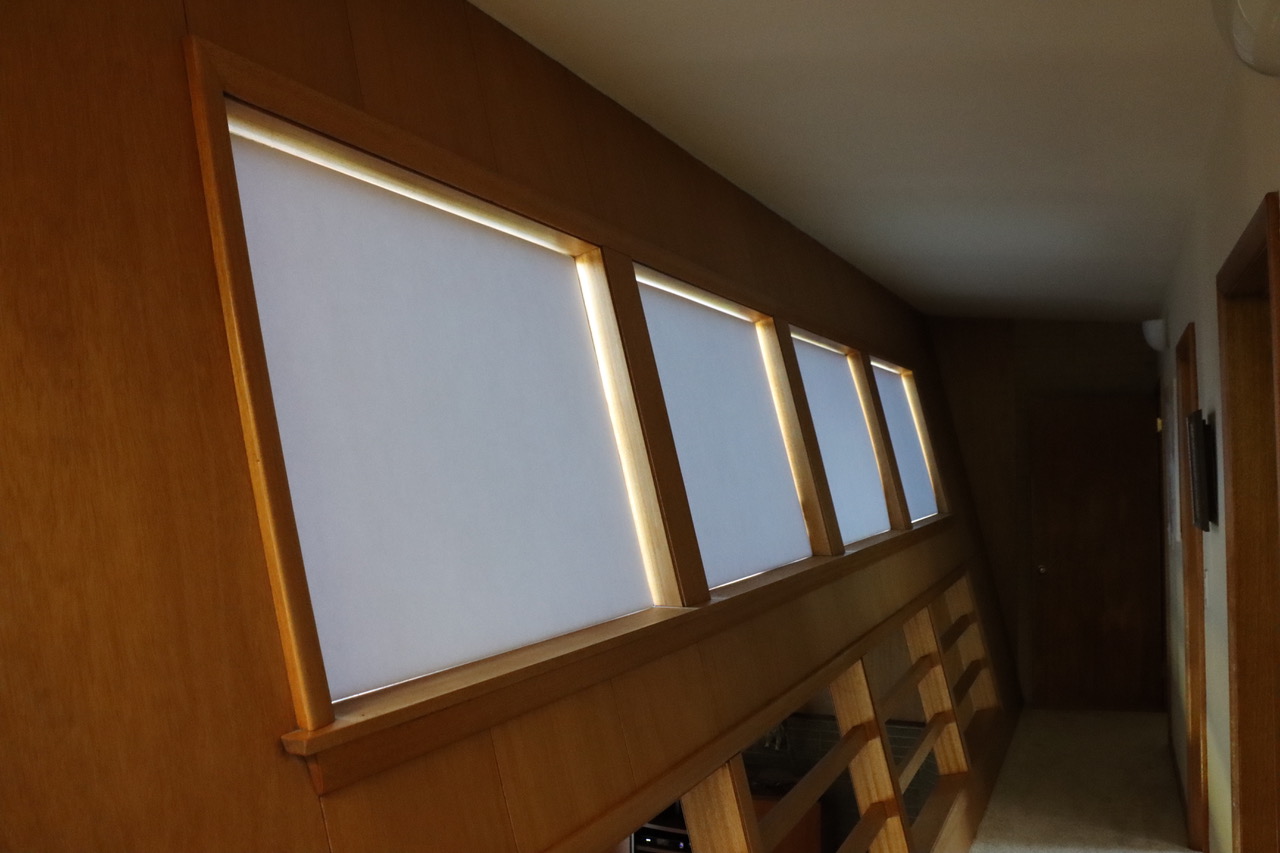 In addition, other bits of infrastructure were not up to the challenge. From Ronald Miller, National Weather Service Spokane, WA:
"The utility company in Spokane has instituted 'rolling blackouts' for the past two days, affecting about 24,000 customers for 3-4 hours during the hottest part of the day.  The news article explained that the outages were not due to lack of supply (Washington dams generate a LOT of electricity, some of which is routinely shipped south), but rather the local city grid. The substations were overheating due to demand and had to be taken offline."
The news article in question: https://www.spokesman.com/stories/2021/jun/28/avista-asks-customers-to-conserve-energy-as-heat-s/

There is much more to be added to this page, but these things are of note:

#1 - There were numerous all time high temperature records set.

#2 - The combination of retrograding ridge in the western United States and the Rossby Wave train coming from the west Pacific both worked to make this event possible, and both were well predicted

#3 - Higher resolution models gave even greater details on the location of the extreme heat.

#4 - This was a high impact event. Temperatures were 20-25C above normal, in summer. The locations impacted were not built for this heat. As the climate of the earth changes, more events like this - where the weather is something never before experienced, and not something a community is prepared for - will likely happen.

This event has also been added to the Severe Event Catalogue for further analysis: 202106 - Heatwave - N.America