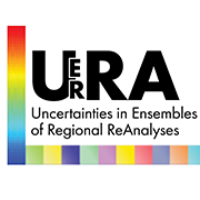 Please refer always also to UERRA documentation in Copernicus Data Store (CDS) for more information about the data. The UERRA data sets in MARS and CDS should be virtually the same.

Description:
The largest spin-up issues occurs during the first 2 hours of the forecast. It is therefore recommended to primarily use the 6 hourly analysis fields whenever this is possible. Also, it seems that three hourly values can be used without larger restriction. The spin-up problems are most pronounced during turbulent conditions, for example connected to deep low pressure systems, and should therefore be limited in space and time.

These spin-up problems are in some situations causing too high wind speeds for the 1-2 hour forecasts. This is most pronounced in the wind gust but the problem also occurs for the mean wind at 10 meter altitude. Similar problems can be seen for maximum/minimum temperature. Then in general there is a spin-up problem for precipitation. Here, it is not recommended to use the first 6 hours of the forecasts. Therefore, if a user wants to use the 24 hour accumulated precipitation it is recommended to use the 30-6 hour forecasts.

Description:
There are some isolated spots of one or a few grid points with wrong zero values in the fields of relative humidity (both at 2m and on pressure levels). It happened because of a wrong algorithm used for re-computation of the values from 0-1 interval to 0-100% (the supersaturation was set to 0% instead of 100% value).

The same issue can be probably found in cloud cover and albedo fields as well but its extent there is not known.

Description:
The sensible heat flux and surface latent heat flux fields  appear to have missing values over the land and because of that should not be used.

Overestimation of relative humidity affecting cloud cover
UERRA-HARMONIE produces too much moisture. This is a known problem for the ALADIN model. The excess of moisture does affect the cloud cover.

The wind directions are wrong by exactly 180 degrees

Description:
The wind directions are wrong by exactly 180 degrees (the direction is the wind is blowing to, rather than where it is blowing from) The U/V components  are not affected.

2m temperature:
Due to biased observational data and a too tolerant quality control, analyzed temperatures can differ severely from other most likely more realistic analysis, e.g. UERRA-HARMONIE or E-OBS. Users are requested to perform additional sanity checks when using this parameter or to switch to the T2m of the UERRA-HARMONIE system. Cold biases are particularly evident in 1965 in Poland and the UK along the coast, and also a warm bias located in 2010 in the Baltic countries. However, other regions and periods might be affected as well.

Precipitation:
Errors have been noticed in the precipitation fields for some areas and time periods. These errors are due to erroneous observations of precipitation equal to zero for long period, which did enter the assimilation procedure. Since the errors are restricted in time and space, the user has to evaluate if the studied time period or region is affected.

The time-integrate surface solar radiation downwards which comprises of both the direct and diffuse short wave radiation reaching the Earth's surface, ought to be positive by definition. Whilst archiving, it was found that it also contains negative values that were traced back to being an artefact from the downscaling from 11 km to 5.5 km. As a work around, we would suggest setting any negative values to zero.

Land-sea mask to be used to downscale MESCAN-SURFEX fields

Description:
The UERRA-HARMONIE reanalyses need to be downscaled from 11km to 5.5km in order to drive the MESCAN-SURFEX system. For that a corresponding land-sea-mask field is needed, which is currently not archived in MARS. As a solution, please download that land-sea-mask field here. We recommend users to apply it for all the MESCAN-SURFEX fields and to focus their analysis on land points only.

More information and an illustration of potential issues when not using the appropriate LSM can be found in the related C3S support ticket.

Soil level parameters are inverted with respect to their Y-axis

Description:
Both of the fields provided by Météo-France for the UERRA soil levels (Volumetric transpiration stress-onset (soil moisture) and Volumetric wilting point)  are inverted with respect to their Y-axis