LDAS activities are part of the Coupled Assimilation Team activities

The structure of the land surface analysis components and their dependencies are shown in Figure 1. Firstly, a screen-level analysis is performed for temperature and humidity. Secondly, the snow analysis and the soil moisture analysis are conducted. Then the soil temperature and snow temperature analysis is performed. Analysed screen-level temperature and relative humidity as well as the ASCAT surface wetness data are assimilated in the simplified EKF soil moisture analysis. Screen-level analysis temperature increments are used as inputs of the 1D OI soil and snow temperature analysis.
Land analysis is run separately from the upper-air analysis. It feedbacks to the upper-air analysis of the next cycle through its influence on the short forecast that propagates information from one cycle to the next. Reciprocally, the 4D-Var influences through the short forecasts the land surface analysis from one cycle to the next. The OI analyses of screen level parameters, snow depth, snow and soil temperature are performed at fixed times at 0000, 0600, 1200, and 1800 UTC. The simplified EKF analysis runs at the same time as the 4D-Var windows for both the delayed cut-off and the early delivery analyses. 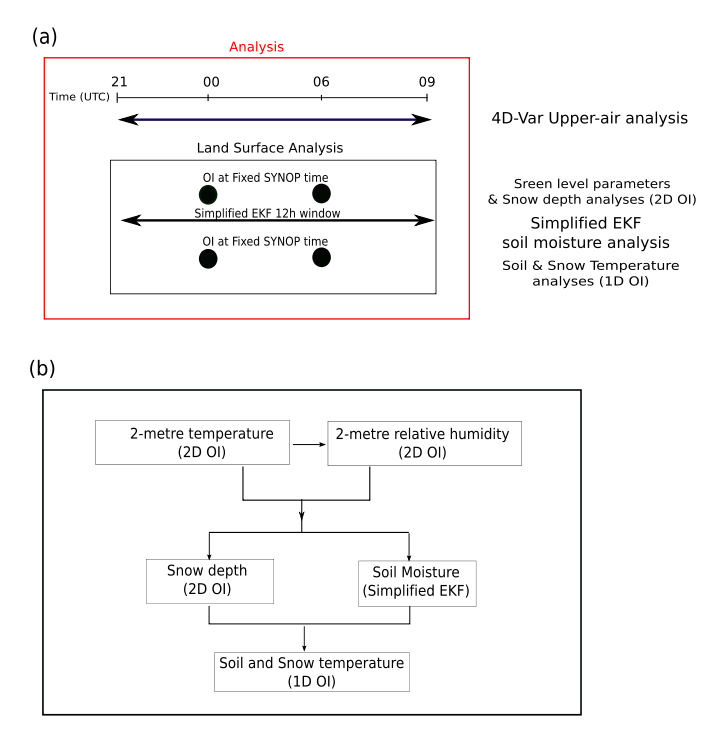 Snow water equivalent, soil temperature, snow temperature and soil water content are prognostic variables of the forecasting system and, as a consequence, they need to be initialised at each analysis cycle. The ECMWF soil moisture, soil temperature and snow temperature analyses rely on SYNOP relative humidity and temperature at screen-level (2 metres) available on the GTS (around 12,000 reports over the globe are provided every 6 hours). The snow analysis relies on SYNOP and national ground observations of snow depth available on the GTS, as well as on the NOAA/NESDIS (National Oceanic and Atmospheric Administration - National Environmental Satellite, Data, and Information Service) Interactive Multi-sensor Snow and Ice Mapping System (IMS) snow cover information. More information on the snow analysis is available in the ECMWF Newsletter no 143, article pp 26-31, Spring 2015.

In the past few years several new space-borne microwave sensors have been developed that give information on surface soil moisture.
The use of satellite data from passive microwave instruments to analyse soil moisture relies on an accurate and efficient radiative transfer model. The Community Microwave Emission Modelling Platform (CMEM) has been been developed at ECMWF for Land Data Assimilation activities. The latest version of CMEM (4.1) was released in May 2012, opening the possibility to use multi-layer emission model that is relevant to account for the soil moisture vertical profile contribution to the signal. CMEM is used by a large community involved in the use of passive microwave data at a range of frequency (L-band from SMOS and SMAP), C-band and X-band from (AMSR-E and GCOM-W). The code and a complete documentation is available at the CMEM webpage.

The European Space Agency (ESA) Soil Moisture and Ocean Salinity (SMOS) mission was launched in 2009. Based on L-band passive microwave measurements, SMOS is the first mission dedicated to providing information about soil moisture globally at about 40km resolution. SMOS brightness temperatures have been monitored at ECMWF in near-real time since November 2010. More information on SMOS activities are available at the SMOS ECMWF web page

The C-band active sensor ASCAT on MetOp was launched in 2006. The EUMETSAT (European Organisation for the Exploitation of Meteorological Satellites) ASCAT surface soil moisture product is the first operational soil moisture product. It is available in near-real time on EUMETCast (which is the EUMETSAT near-real time dissemination system) and it has been monitored operationally at ECMWF since September 2009: http://www.ecmwf.int/en/forecasts/quality-our-forecasts/monitoring/soil-moisture-monitoring

The offline LDAS relies on the HTESSEL offline model enhanced by an offline python-based Simplified Extended Kalman Filter (SEKF) soil moisture analysis (Rodriguéz- Fernández et al., 2019) and snow analysis. The offline LDAS uses a priori interpolated and gridded observations on the model grid. It uses 12-hour assimilation windows and EDA-based SEKF Jacobians in line with the IFS coupled LDAS.  The offline setup is much faster than the IFS, which makes it well suited to research and reanalysis applications.